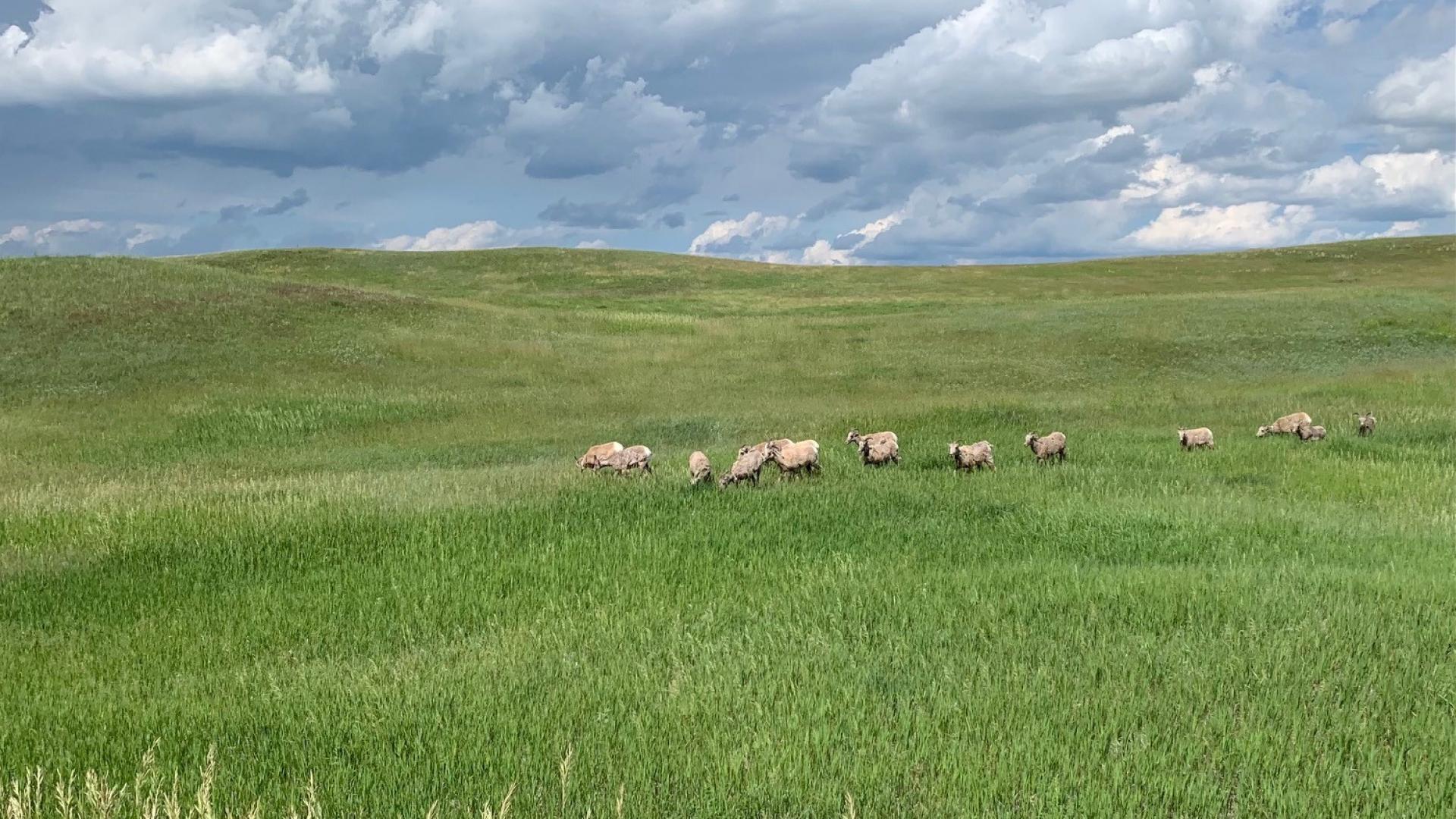 The root crown usually has several to dozens of buds (growing points), and each bud can produce new tillers and roots. New tillers are anatomically and physiologically connected to older tillers. Therefore, several connected tillers may all live and share water, carbohydrates, and nutrients. If one tiller dies, an adjacent tiller with established roots often continues to live and/or the plant can produce a new tiller from a bud located on either the root crown or the base of a tiller.

Perennial bunchgrasses perpetuate from one year to the next by developing buds on the root crown each fall, storing enough energy in those buds for them to survive the winter dormant period, and having enough additional stored energy in the bud for it to produce the initial growth on the tiller's first two to three leaves the next spring. If the plant cannot form buds at the base of a tiller before it enters summer or fall dormancy, or if the buds that do develop lack enough energy reserves to keep the bud alive during the long winter dormant period, the tiller and eventually the plant will die. Only after a tiller produces the first few millimeters of growth on the first two to three leaves is there enough photosynthetically active leaf material for the plant to produce a surplus of energy (carbohydrates) that can be used to produce many leaves (forage) and store energy for growth the next year.

When a tiller becomes reproductive, the tiller elongates, and the growing points located on the leaves and at the nodes and apical meristem (terminal growth point) become elevated above the ground surface. Elevated growing points are at risk of being removed by a grazing animal. Whether one or more of these growing points are grazed off has implications for how the plant responds to defoliation. When the terminal growth point is removed, the plant cannot produce any additional leaves or a seedhead. New leaves can only be produced if the plant activates either a crown or axillary bud to produce a new tiller. Complete tiller replacement is a slow process and may use substantial amounts of stored energy. Removal of the terminal growth point may have negative or positive outcomes depending upon management goals, how much leaf area remains after grazing, and the ability of the plant to regrow after defoliation and store energy for growth the following growing season.

A reproductive tiller may remain vegetative if the terminal growing point (apical meristem) is removed by grazing. Vegetative growth, therefore, is favored by some grazing, which reduces the number of seedheads produced and may stimulate the formation of new tillers. Vegetative tillers usually are less stemmy and more nutritious than reproductive tillers. Forage grasses in irrigated pastures often are maintained in a vegetative state by periodic removal of the terminal growth point. Following removal of the terminal growing point, existing leaves may continue to grow and produce forage if defoliation did not remove the growing point at the base of the leaf blade. In addition to continued leaf growth, the plant also may activate a bud to produce a new (replacement) tiller which can create additional forage from both existing leaves and new tillers. The addition of irrigation water permits the replacement tiller to grow toward completion of its full growth cycle. When soil moisture is available the entire growing season, this process can be repeated many times and a large amount of forage produced. Because some of the leaf blade always remains after grazing, growth continues unimpeded, which results in ample storage of energy (carbohydrates) in the buds used to initiate growth of tillers the following year. Removal of the terminal and other growing points late in the growth phase, however, can harm plants when they lack the resources (water and nutrients) to activate the bud, produce a new tiller, and complete the growth cycle. In this scenario, the buds do not develop or they do not store enough energy to initiate growth the following year.

An apical meristem (expanded portion of Figure 1) is responsible for leaf formation. The intercalary meristems at the base of leaf blades and sheaths are responsible for leaf expansion (insert in Figure 2). Each leaf is rolled into a tube-like form in its lower portion and unfurls as the blade extends. Subsequent leaves follow the same pattern.

As new leaves push up from the center of the rolled tube portion of the first leaf, the growth is similar to the extension of a telescope. In Figure 1, leaf 1 is the oldest; leaf 8, the youngest, is emerging. In this example, the growing point (apical meristem) is at or near the soil surface , which provides protection from defoliation by large grazing animals. Defoliation, therefore, removes leaf tissue but, in most cases, will not harm the growing point at the base of the leaf blade. It is this growing point that produces the bulk of the forage.

Grass growth, for either cool- or warm-season species, begins in spring when the soil warms. As the first grass leaf emerges its length or height increases due to new cells being produced at the base of each leaf blade. This growth area (intercalary meristem) is at the base of the leaf blade and adjacent to the growing point for the leaf sheath (insert in Figure 2), which has not yet developed.

Leaves have a definite life span, as do tillers. The first spring leaf normally dies in the summer. Leaves are most photo-synthetically active when they reach full expansion. As they age, their capacity for photosynthesis declines. The excess carbohydrates produced through photosynthesis helps produce additional leaves, seed, roots and buds for new tillers the following year. Thus, photosynthate produced by the plant is used efficiently in growth and maintenance. Once a leaf can no longer produce enough carbohydrates through photosynthesis for its own needs, it dies.

As the growing season progresses, grasses begin to allocate their resources to seed production rather than leaf production. Similar to animals and humans, hormones within the plant signal when it is time to start producing reproductive tissue. Hormones signal the apical meristem, which is the growing point of grasses, to produce a seedhead.  The tiller begins to elongate, and as it grows, it elevates the growing points (with the exception of basal buds) above the surface of the ground.  Plants differ in how early and how quickly they initiate tiller elongation and seedhead production.  Differences in this timing affect the plants ability to withstand grazing by herbivores. If a herbivore grazes an elongated stem and removes the elevated growing points, seed production is stopped for that tiller. Consequently, if seed production is a management goal, grazing should cease when tillers begin to elongate. The period of tiller elongation to mature seed is often called the "critical period." Allowing reproductive tillers to mature and produce seeds can increase the density of plants in the stand. Many bunchgrass species are dependent on seed production for reproduction; in these plant communities annual grazing during the critical period can decrease stand density since plant mortality is not matched by new plant recruitment. However, annual seed production is not essential for stand maintenance because few plants typically die each year, and some grasses reproduce by vegetative means from underground rhizomes or above-ground stolons.  In rhizomatous species, grazing during seed production may stimulate future tiller production from the basal buds if there is adequate soil moisture to allow for continued plant growth.

The energy (carbohydrates) used to produce the first one to three leaves of a grass plant each spring does not occur from photosynthesis (the production of carbohydrates from CO2 and water that become the leaves, roots, and seeds of the plant), but rather from carbohydrates stored by the plant the previous growing season. Carbohydrates produced the previous growing season that the plant does not use to produce its leaves, stems, roots, or seeds that year are called soluble carbohydrates and can be stored in the plants buds, the root crown, roots, and/or tiller bases. The role of the stored energy is to keep the plant organs alive during the dormant period and to provide the energy needed to produce the first few leaves that emerge the following spring. Most, if not all, of the energy used by the first few emerging leaves comes from energy stored in the bud. Once the first leaves extend, the plant has enough leaf area to successfully conduct photosynthesis to meet the energy needs of the plant and produce the carbohydrates needed for additional leaf production and growth. These carbohydrates also provide enough energy for the roots to grow and the plant to produce seed. When defoliation removes the growing points on the plant’s tillers, the plant must use carbohydrates stored in its buds, root crown, and/or roots to initiate new growth. If the plant does not have the time or resources to fully regrow its leaves and also produce enough soluble carbohydrates to keep its buds alive during the coming dormant season and produce the first few leaves the following spring, the plant can die. The primary role of the stored carbohydrates is to keep plant buds alive during dormant periods and initiate new growth in the spring, not initiate regrowth after grazing. After grazing, regrowth from growing points at the base of the leaf blade allows plants to rapidly regrow without having to use stored energy the plant needs the following spring.

See the fact sheet Carbohydrate Reserve Theory: What You Learned May Be Wrong