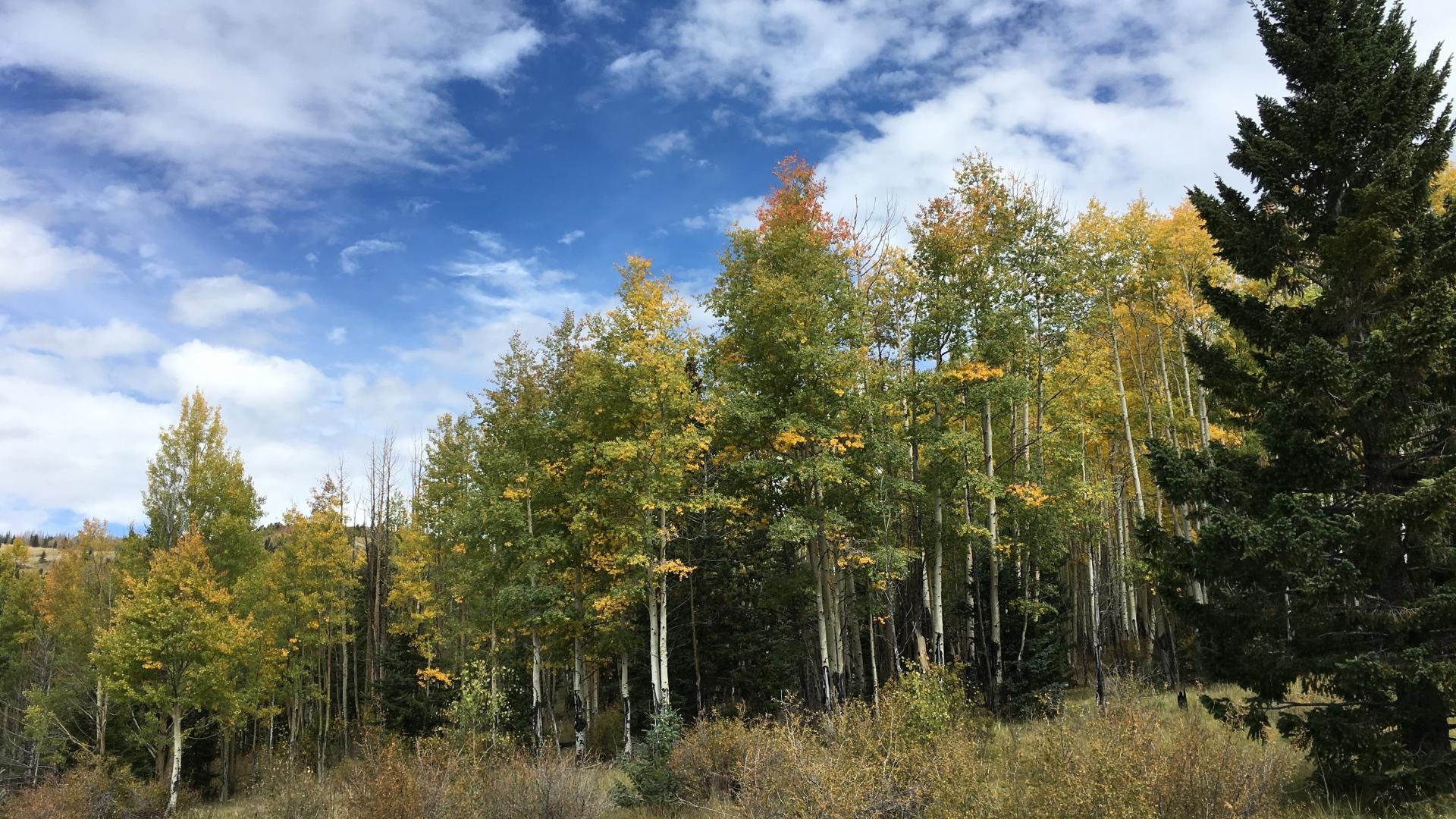 The Controversy over Aspen 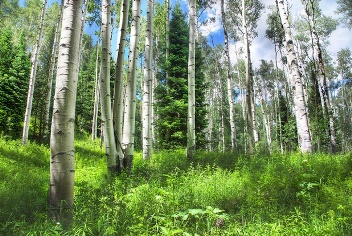 Are we Losing our Aspen? Aspen "decline" comes in two flavors: long-term decline related to conifer encroachment and short-term decline (a.k.a., Sudden Aspen Decline or 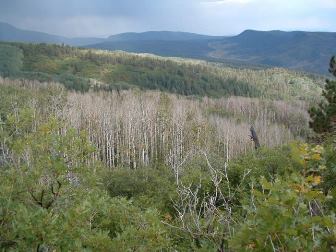 SAD) initiated by drought. For decades we have been hearing about great losses in aspen coverage in the western states due to advancing conifer succession. Some of these changes were caused by past management practices, such as fire suppression and active removal of aspen or management for higher value conifer timber species. More recent evidence, however, suggests that a regionally moist 20th century generally kept fire events limited, allowing conifer expansion and aspen decline. In other locations, aspen actually expanded its range so we must be careful not to oversimplify regional patterns.  This interaction with conifers does not explain losses in stable (nearly pure) aspen forests.  Thus, we must understand at least two aspen "types" which depend on different ecological mechanisms to persist.

SAD is defined as the rapid die-off of both overstory canopy trees and supporting root systems where the end result is the death of complete aspen clones.  Strong evidence has been presented that this type of rapid die-off has occurred in southwest Colorado, but corroborating support is limited elsewhere.  There has been much broader patterns of mature tree mortality across the West and in southern Canada associated with the 2001-2004 drought.  In many instances, combined effects of overstory drought-induced die-off and intense herbivory of young aspen by browsers has led to "de facto SAD" where we witness complete aspen community collapse. Photo by Phil Kemp, US Forest Service, Mancos-Dolores District.

Fire Ecology in Aspen Forests. Aspen has conventionally been thought of as "fire dependent," meaning that it requires forest fires to thrive. The quick-sprouting root system of 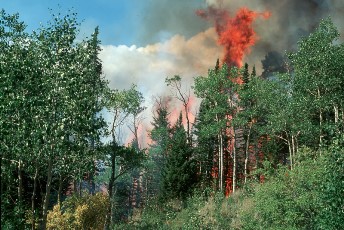 an aspen clone  rapidly regenerates after all types of disturbance (i.e., landslides/avalanches, insects, disease, drought, tree harvest) including burning. Moreover, recent discoveries of high genetic diversity in aspen communities and common occurrences of seedling (sexual reproduction) establishment following fire is leading practitioners to question traditional aspen management. Fire suppression during recent decades is thought to be partially responsible for long-term aspen decline, however several experts have questioned this assertion. Likely, there are several causes for the lack of fire, most notably long periods of climatic moisture that increased the number of conifer trees in some aspen forests over the past century. Stable (nearly pure) aspen is much less conducive to wildfire or prescribed burning; rejuvenation in these forests is dependent on more continuous, low-level, tree mortality and regeneration.

Use of fire for restoration is a viable means of reducing conifers and promoting aspen suckers and seedlings in seral forests. Where disruption of fire cycles due to past fire suppression is evident, using fire to restore aspen is recommended.  Some managers favor a combination of harvest and burning, particularly where the possibility of escaped fires can damage property. Photo by Bob Campbell, US Forest Service.

Aspen as Forage for Livestock and Wildlife. Quaking aspen are widely revered by range and wildlife managers alike for their diverse and nourishing array of understory plants. 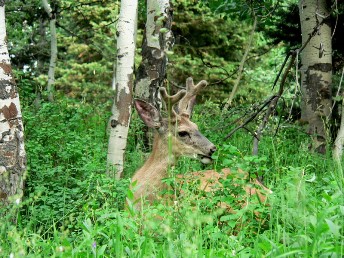 Young aspen sprouts are particularly favored by deer, elk, cattle, and sheep for their highly nutritious leaves and twigs. During the late summer and early autumn aspen may be the only green, nutritious, component of forests available as forage. Fortunately, aspen leaves contain defense compounds (phenolic glycosides and condensed tannins) that may deter herbivores, at least partly, from devouring young suckers.  However, with high animal concentrations—often a mix of wild and domestic herbivores on the same landscape—defense mechanisms may not sufficiently deter browsing on regenerating aspen suckers. If these consumption patterns persist over many years aspen forests begin to lose their age and structural complexity.  This situation seems particularly serious is stable (nearly pure) aspen forests where uncommon large disturbances offer little hope of broad forest rejuvenation.

Ongoing monitoring activities are attempting to document where livestock and wildlife browsing is threatening future aspen trees. In some cases, there is clear evidence of aspen collapse related to intensive browsing. The presence of large carnivores, such as wolves, grizzly bears, and cougars, may deter aspen browsing by keeping livestock and wildlife on the move. Domestic livestock may be more easily herded to prevent over browsing aspen. Range and wildlife managers are now working collaboratively to curtail aspen recruitment failure while continuing to sustainably utilize forage resources. Cooperative research and monitoring, as well as prudent use of fire, tree harvest, and post-treatment protection, will be required to overcome the widespread lack of aspen recruitment. Photo by Teresa Prendusi

Placing a value on Aspen. We often hear about the diverse values of aspen forests, but what evidence is there to support such assertions? Much of the "value" of aspen lies in 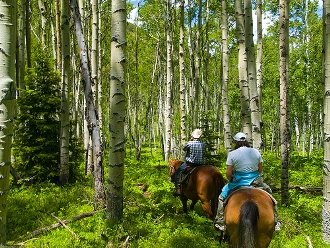 its apparently innate beauty; a rich gold or fluttering green among the sea of conifer and sagebrush. Utah recently recognized aspen as its State Tree largely on the basis of esthetic appeal. Digging a little deeper, however, we can tap into, perhaps even monetize, other aspects of aspen worth. For example, aspen is among the most biodiverse vegetation types in the Intermountain West. Additionally, range managers are well aware of the high value forage resident among aspen groves. A diverse array of wildlife utilize aspen for cover, food, habitat, and water. There is some evidence that healthy aspen communities facilitate water conservation. Thriving beaver colonies create migrating water retention ponds, as well as raising water tables and increasing wildlife habitat. Aspen is valuable for a variety of wood products, including flooring, mine supports, particleboard, pet bedding, excelsior (wood fiber packaging and cooling devices), and ski/snowboard manufacturing. Aspen forests make for cherished camping and recreation destinations, popular ski resorts, and general tourism promotion. Finally, aspen may be used as a fire break via selective cutting or light burning around developed areas.What is the value of aspen?  Ask any westerner if they could go without it. License: Creative Commons 2.0 (by-nc-sa) 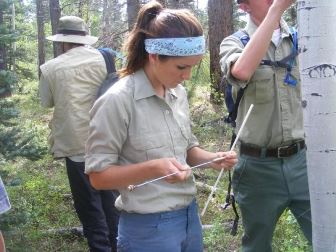 sprouting response is not enough to protect from post-treatment browsers. In order to sustain aspen on the landscape land stewards are adopting "resilience management" strategies. In essence, this entails preserving options. Where fire was historically an important regenerative tool in seral aspen, judicious use of selective harvest practices and prescribed and wildlife fire management may be invoked. A key component of resilience management means understanding ecological function: not all aspen stands are alike in terms of their ecology and earlier human impacts. Treating aspen as a "one-size-fits-all" prospect may cause irreversible damage.  Thus, locally-based knowledge, current science, ongoing monitoring, course correction (where necessary), and institutional support—all key elements of "adaptive management"—provide a recipe for resilience. The complexity of resilience management will require multiple perspectives if they are to be successful.

These approaches will become particularly important with the advent of climate warming in the West. Changing climates are expected to bring two opposing elements into the resilience equation for aspen: 1) warming temperature may cause decreases in suitable aspen habitat as these communities move upslope, and 2) expected increases in fire frequencies and extents may provide opportunities (at least temporarily) for aspen expansion or recolonization. Photo Credit USFS

Are We Losing Our Aspen?

Aspen as Forage for Livestock and Wildlife